KK, N, E.G, M.M and I visitied the Isle of Skye at the very end of May. I don’t think I should even note it down but… this time, Scotland was sunny. Again. Like it always is. We all got a bit sunburnt. Like one always does when visiting Scotland. The weather forecast was so adamant on the sun that no one even took any waterproof clothing. This is special. 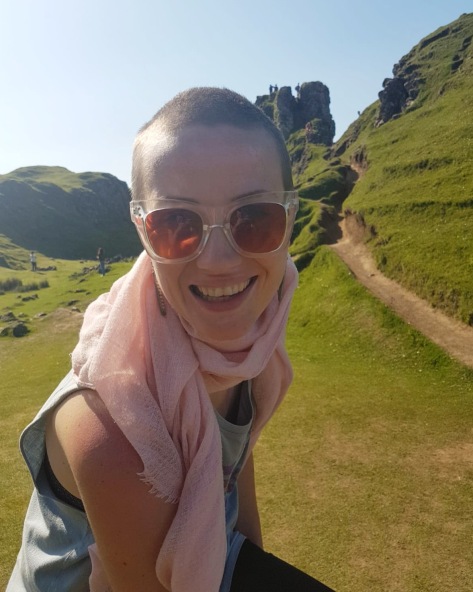 We flew into Inverness, took a car. Drove back to the airport, since N forgot his wallet and passport into the plane. Drove off again. Drove some more. Stopped the car at some point and smelled the air on the way. People had parked their caravans next to a large road and were grilling dinner. The air smelled of summer evenings and lower heartbeats. Mine was beating faster, though, because I knew we were close to the neighbourhood where the Cape Wrath trail runs…

We had dinner in a pub close to Skye bridge. It was light at 10pm. We were in the North and it was summer. The moon lit up the remaining snow on top of the Black Cuillins. A perfect view from the doorstep of Sligachan Bunkhouse.

We had breakfast at the Sligachan Hotel, just a 5-minute walk from our bunkhouse. The views outside the hotel were so distracting that I was late to breakfast and the first one to leave. Just sitting outside, looking at those fast moving clouds was enough to fill my soul. #soulnutrients – mental note, never use this. 🙂

We then drove to Elgol and used Misty Isle Boat Trips to get to the shores of Loch Coruisk (and avoiding a 30+ km hike). The only way in on foot involves a long hike and is better with a night camp by the lake shores. Since we did not bring tents, a boat ride it was! Loch Coruisk… Ohh. Many legends are told of it. Dozens and dozens of travel diaries describe Loch Coruisk as otherwordly or eerie. It is told to be a strange place, hidden from the rest of the world by the Cuillin mountain range, with no quick access to its shores. People have gone there to search for the legendary kelpie, to meditate or to bask in the oozing awe which the secluded space creates.

When we reached the loch, all we got was blasting sunshine that was soon followed by some cold winds. Nothing was eerie apart from the absolute greyness of the waters. And that’s when I realised it. I had arrived with fixed expectations. I had arrived imagining the loch would greet us with goosepump inducing presence, immediately throwing us into an unknown fairytale world.

As soon as I let go of that preconception, the winds stopped and the landscape transformed itself. Not into a gloomy night of rain (as you hear from the typical Scottish stories) but into a desert-like terrain of warmth and stillness. And now I’m 100% certain that there really are spots in this world that change their looks by magic

I like how sometimes, wilderness is only a boat ride away.

We spent the night at Skye Backpackers hostel. For dinner, we drove across the bridge again, and dined at a fish food restaurant located in a train station between timber ferries and train tracks. We literaaly drove our car onto the train platform by… following our logic. 🙂 A hint of Twin Peaks vibe was felt.

We hit the road after breakfast in the hostel and then hiked the Quiraing Loop (Trotternish Ridge) for the morning (we started closer to Uig) and paid a visit to the Fairy Glens later in the day. I had not been ready for the people. I had not.

Our accommodation was in the fabulous 6-bed dorm in the Cowshed. This is the most fabulous hostel I have ever, ever staid in. The living room and kitchen area was also one of the fanciest living rooms I have ever been in. Cowshed in located on the hill, so the view from its wall to ceiling glass window looks straight at the water. With every night, our accommodation got better and better. I am happy it culminated with this.

N discovered his shirt was missing. It was not found.

We had breakfast at a hippie cafe in Portree. We wanted to see the colourful houses – and we did – but then also realised that the best view of them is probably from the water.

We saw a wild fire on our way back. Thought it might be the shirt on fire. It was hell of a dirty shirt, you see. But no. It was a real fire. It is the second wild fire I have witnessed in my life and it punches strongly into your stomach. The devastation is quite strong.

We did stop at the bunkhouse of our first night to check for the missing shirt but there was no sign of a shirt or of other humans. We admitted our honest defeat.

As our good bye to the Isle of Skye, went to see the Old Mann of Storr. There was Viking treasure buried close to it. But that was a while ago. I like the fact that people are still flocking to big stones like they have always done. In many ways, nothing has changed.

Back to Inverness and then home. Still, it takes 10-12 hours to come home from anywhere on this island.

What was most surprising? How Skye was not wild. I think my imagination had prepared me for nature close to the Highlands where you can walk forever and still only be surrounded by trees and mountains. But the feel of Mini Patagonia was nonetheless magnificent.