In November, my lover took me away on a surprise trip to Dartmoor National Park. I have written about this phenomenon before – of going away without knowing where. And of how much I love it, and live for it, never knowing, never preparing. But what made it even better was the Wistman’s Wood. The forest I had forgotten about  for two years. And suddenly, there it was, at our doorstep. The weather was gloriously moody, yet not serious. There was more light than rain. The gnarliness of Wistman’s Wood was even better because we had not expected it.

This is how my first Dartmoor visit stays with me: utterly gorgeous autumn lanes, forever meandering, forever narrow. Huge fir trees escaping towards skies, while tiny ones held themselves closer to the ferns. The famous tors were there just like in story books, and we climbed one. I will remember the nighttime mists, the flood lights and shadows we projected to the skies. The boggy meadows where you should keep to the paths. But of course, you do not.

I saw my first ever badger crossing the road we were walking on, saw a sudden stone cross appearing from the mists, hares jumping across rivers. It was a perfect trip, filled with stepping stones, late autumn moods, warm rooms, villages more real than Hobbiton, pubs more cosy than a goose mother could dream up in her feathery bed (and with actual geese and chicken visiting us at our table), amazing scones in a pub and just happiness, without the words ever getting used or thought about. 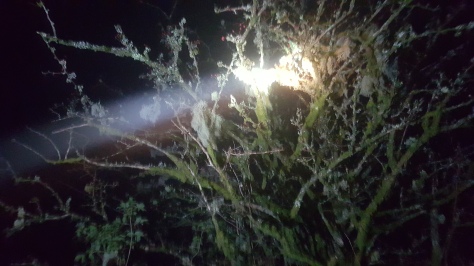 And in December, a trip to Cotswolds followed with friends. It was supposed to be a quiet one, I know. Just relaxing, just sitting by the fireplace, going for short countryside walks, and all those things people do in Castle Combe. Drink sherry. Gently mock the lawn of the golf course. Yet somehow, I was never there in my mind.

Once again, we got amazing weather for the entire trip, from Lacock to Castle Combe and beyond. I was tired. I was confused. I just never fucking recognise when the seasonal depression kicks in. I have become quicker at recognising it, for sure; now it takes me a couple of weeks to discover what is going on. Not that the heureka is the highlight of my month, but at least then I know. But being around friends and trees is always so good. Even if you might as well not be there. But maybe it does make a difference. You just can’t tell because of your disturbed brain chemistry. But what definitely helps is the sun, the neolithic stone formations, old mounds and trees with visible root carpets. And the goodness of people. And some ale.

And that was how 2017 ended. All together, around 30 days spent walking, so a wonderful year filled with mountaints from Scotland to Wales and Uzbekistan. Not to mention the coasts and the forests. Yup. All will be good. Also this time.

Lea Valley Way is the 50-mile long-distance walking route following the River Lea from its birth spring in the suburbs of Luton to the Thames near Limehouse. 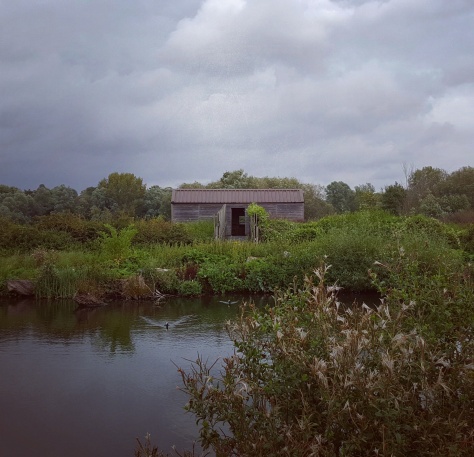 Originally, I planned on finishing the walk in 4 consecutive days in July 2015, but as life would have it, I finished it in September 2017. : )

Never ever underestimate a journey. Always take a compass. And don’t forget to carry apples. Also, walk with friends who carry them.

Thank you, Lea Valley Way. You were my first long distance walking path. And the start of many things that have made me happy.

I spent the three very last days of April in North Yorkshire, in the land of wild garlic, frolicking ewes and magnificently shaped rocks.

Little brooks, arched bridges, slate roofs, trees that are still barely accepting the arrival of spring, private fancy bidges and light hearts – these are the keywords from one of the best weekends of the year. So far.

My heart feels light in Yorkshire. Not because you can go trekking with llamas there and imagine yourself to be standing high on the Andes platoo. Not because it offers you the best little pies in the country, and shop keepers who literally say “Welcome to Yorkshire” in your face. 🙂 It’s actually not all romance and glory. On our circular walk from Pateley Bridge (via Brimham Rocks) we also saw large flags with the word “Brexit” written all over them. Fair enough, the flags were also half-burnt but… Even that could not take the lightness away. I do not know how to be a political person, really. And probably never will. 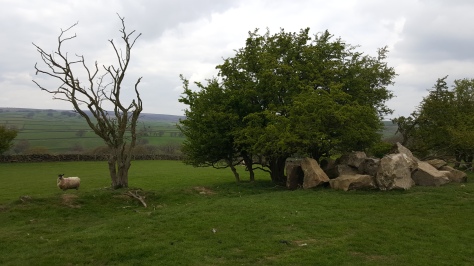 North Yorkshire’s lightness seems to come from the wide open spaces, from the tiny brooks leading you to bigger rivers and bigger bridges. Yet, there’s no unnecessary quaintness (like sometimes in the Lake District, for me, sorry!). Spring always arrives much later in here. In fact, it’s almost like you get two springs in one year, just by travelling between Yorkshire and London.

The source of the lightness seems to be a mix of natural beauty (the land is never too flat), a certain sense of time (nothing is too compressed or too eternal or long) and from forgetting to complain. Completely. (A habit I picked up during last 6 months and am now dancing a slow departure walz with.)(Can’t wait for the music to end!)

And then there’s a sense of magic. Somehow, behind every corner, there’s a surprising view you just did not think or imagine to meet you. Everything is clean. So clean that is has an immediate effect on your mind. Something would almost suggest the presence of a monastery, of sorts, but all you can see are country lanes and daffodils. Maybe this it, though? Might as well be. The real reason why the heart becomes so light in here? Parts of North Yorkshire feel like a vast, outdoors monastery where walking is proof of your silent yet lively dedication. To life.

And it sure helps to hear the cry of a close-by yet unseen peacock just when you are crouching down to pick some of that long-awaited-for wild garlic. In your undefined and unnamed temple gardens.

So, what will actually happen when I finish the Lea Valley Way? Will there be a tiny deluge or will the river itself disappear? (No, no one is suffering from illusions of grandeur in here, no one.)

Lea Valley Way is the 50-mile long-distance walking route following the River Lea from its birth spring in the suburbs of Luton to the Thames near Limehouse.

It can be pleasantly walked in 4 days or so the Internet says. When I was planning to walk it in one go last summer, there was only one proper description of all stages available online.

Stage 2 of the walk stretches from Hatfield to Broxbourne. By all accounts it should be pleasantly doable in one day, during the warmest sunlight hours. “I can’t believe I’m finally finishing it today!” I told my lover, my friends and my housemates when leaving for that last stretch that Saturday morning.

The first half of the walk was cloudy, but after leaving Hatfield behind and lunching in Hertford, the skies lit up and our step got faster. (Sadly, G actually had to go home, since his foot had managed to seriously convince him it was too exhausting to move.) I also witnessed my goldenest golden hour during this stage of the walk. Everything was going brilliantly.

We continued on, following the lovely water. The darkness had long-ago fallen when S-L and I reached Dobb’s Weir – a location separated from the Broxbourne train station by a few kilometers. Finishing the Lea Valley Way was going to happen tonight. Suddenly, all the tiredness was gone from my legs as we started to cross the canal (the river has been directed into a canal around those parts already), I could clearly imagine reaching the station within the next half an hour and… and… and… The road was closed. Blocked (even cordoned off, maybe?; can disappointment also create false memories?) off by a large road works sign. Somewhere not far off in the darkness we saw the orange working lights of the industrial vehicle. But. Not all was lost yet!

I dashed off to talk to a security man. And yes, all types of roads were closed. However, he directed us to a path in the forest which would take us straight to Broxbourne train station. So we entered the dark forest-like area with the help from the flashlights on our dying phones. We walked to the railway (“When you’ve reached the railway, you’ve gone too far,” the man had also said). Upon then retracing our steps we found the path. Also to be blocked off.

And we decided to call an end to our day.

I asked for local cab numbers but the security van gave us a lift to the train station. (Reminder to self! Always carry chocolate around to give to nice people!)

I still have roughly 3 km to finish, which I will do at some point this year. How else can I ever say that I’ve followed an entire river, right?

2) If destination becomes a goal the journey will lose a bit of its magic;

3) Passing a race track in the dark makes you feel like a character in a James Bond movie;

4) Trips can be undertaken that take you to a beginning of a journey which itself is actually shorter than the trip to get there. (Which part of the journey is the real journey? she asks in an ominous voice.)

My dear and much-esteemed last kilometers of the Lea Valley Way,  I’m coming to find you in 2016.